Face Rock was sunny and rocking today! In addition to seeing hundreds of common murres at the top of Face Rock, we were treated to about an hour-long “courtship” by 2 tufted puffins. After strolling about near the top for 20 or 30 minutes, they spent 20 or 30 minutes more knocking beaks together in an act of courtship before walking off together into a burrow that I suspect became their love nest.

Only 20 or 30 feet from this display sat a peregrine falcon on its nest beneath a boulder, presumably with an egg beneath its sculpted chest. Shifting positions often, sometimes with its head facing outward, sometimes with it tail feathers gracing our scope, the peregrine thrilled viewers every time it moved.

Amazingly, a third tufted puffin sat on the very same 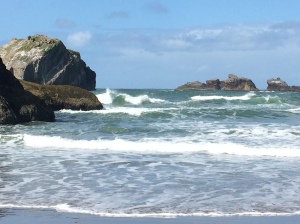 boulder immediately about the peregrine’s shaded nest, apparently content to simply watch all of the activity around it, perhaps unaware of the falcon only a few feet below. I personally think that this puffin was relishing the attention it was getting from the gaggle of humans in the parking lot that were constantly pointing at it and jumping around in the funny way that only humans do.

Pigeon guillemots – a baker’s dozen resting at the surf line for over an hour – later parted company with one another with 5 of them flying to the top of Face Rock to what looked to be potential nest sites.

And, of course, we were in almost constant sight of the two black oystercatchers on their nest atop the first rock island north of Face Rock.

It was a great day for SEA volunteers and all of the visitors we thrilled with our scopes.

A World Without Salmon

There are so many things going on at once or our planet Earth, and with all of the news media and social networking blasting us every day – 24 hours each day, it’s getting harder to determine what’s real, what’s important, and what we can allow into our crowded schedules and minds. Keeping all this […]

The way humanity has been mistreating Mother Earth has rapidly risen to the top of our news media, governments (except the US government which seems intent on denying that we have environmental crises all around us) and environmental organizations. Here’s an article that you might appreciate reading because it takes the problem of plastic from […]

Invitation to Take Action for our Coast

While we are constantly bombarded by the news media and by concerned environmentalists about all of the damage humankind is doing to our planet, it’s encouraging to learn about all the many organizations that are fighting for our future. I’m thankful that we are not just having to sit back and watch others do this […]

Since the first time I walked an ocean shoreline in Sitka, Alaska, I have been fascinated by all the creatures I saw there. My children were even more fascinated than I was, so we spent a lot of time poking and prodding and picking up “creatures.” We even went so far as to bring some […]

Here’s an article that Loren Morris found in Forbes Magazine a couple of days ago. It’s a beautiful example of what we can do as concerned citizen scientists who are willing to volunteer our time and talents to making a positive impact on our environment.  I hope you enjoy it and can come up with […]

Have you ever said to a friend or family member that s/he has to come out of her/his shell? Well, watch this video and see how tenderly (and maybe proudly?) this puffin parent helped draw the chick from its shell!!! I think you’ll be fascinated!!   Puffin Power