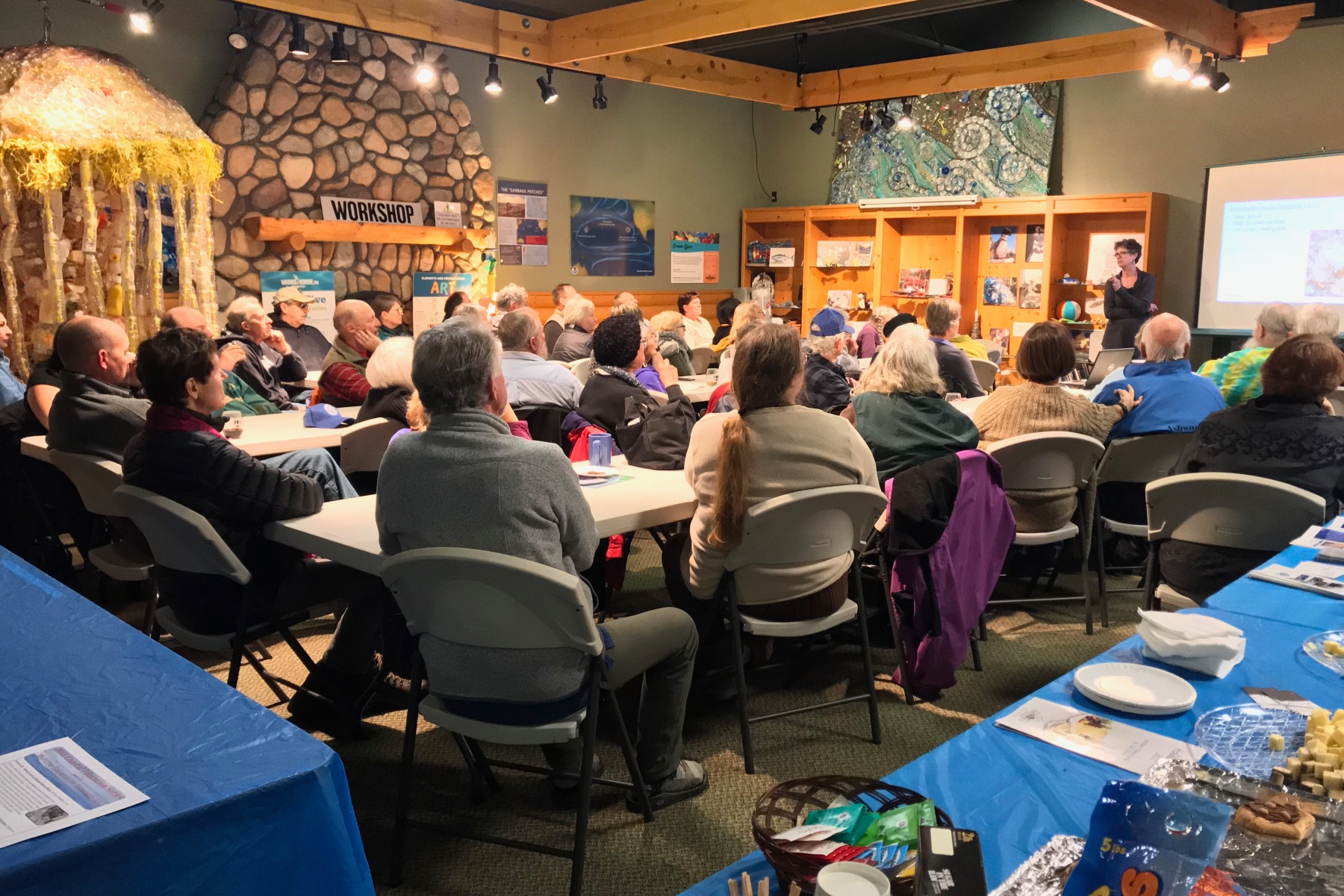 “Education” is our middle name. So, of course, Shoreline Education for Awareness, Inc. wants to promote and propel your education about our coastal waters, the rivers that flow into them and the marine life living throughout the waters of the world. There is “real science” being done that can inform us about the health of our global waters and help us discover both the problems dangers it faces and the solutions that are being developed.

The more we know about the world’s water habitats and the life that inhabits them, the better we are able to make decisions about how we manage our own lives and our communities as they pertain to this precious resource.

We encourage you to take time to explore the research reprinted here as well as that being done by the organizations whose site links you see at the bottom of this page.

Overlooked Sea Louse May Be a Big Problem for Salmon

On Knowing the Winged Whale

Please Do Not Feed the Wildlife

King of the Salmon found near Port Angeles

An adorable discovery about Puffins

Congrats to Elakha Alliance. Keep up the good work!

The Recovery of Ground Fish for the West Coast

Microplastics were found in sea salt several years ago. But how extensively plastic bits are spread throughout the most commonly used seasoning remained unclear. Now, new research shows microplastics in 90 percent of the table salt brands sampled worldwide.

Of 39 salt brands tested, 36 had microplastics in them, according to a new analysis by researchers in South Korea and Greenpeace East Asia. Using prior salt studies, this new effort is the first of its scale to look at the geographical spread of microplastics in table salt and their correlation to where plastic pollution is found in the environment.

“The findings suggest that human ingestion of microplastics via marine products is strongly related to emissions in a given region,” said Seung-Kyu Kim, a marine science professor at Incheon National University in South Korea.

National Geographic has also teamed up with Wattpad to raise awareness of the global plastic issue through a creative storytelling challenge. We’re asking people to share a story—real or fiction—inspired by this global issue. Learn more and share your story here: www.wattpad.com/user/NationalGeographic

Salt samples from 21 countries in Europe, North and South America, Africa, and Asia were analyzed. The three brands that did not contain microplastics are from Taiwan (refined sea salt), China (refined rock salt), and France (unrefined sea salt produced by solar evaporation). The study was published this month in the journal Environmental Science & Technology.

The density of microplastics found in salt varied dramatically among different brands, but those from Asian brands were especially high, the study found. The highest quantities of microplastics were found in salt sold in Indonesia. Asia is a hot spot for plastic pollution, and Indonesia—with 34,000 miles (54,720 km) of coastline—ranked in an unrelated 2015 study as suffering the second-worst level of plastic pollution in the world.

In another indicator of the geographic density of plastic pollution, microplastics levels were highest in sea salt, followed by lake salt and then rock salt.

The new study is the fifth on salt published in recent years. Others have been done in Spain, China, the United States, and by a group from France, Britain, and Malaysia.

Sherri Mason, a professor at the State University of New York in Fredonia, who partnered with researchers at the University of Minnesota on a separate salt study, said in an interview the new findings add “another piece to the puzzle” to assessing the impact of microplastics.

“That fact that they found higher counts in Asia is interesting. While not surprising, you still have to have the data,” she says. “The earlier studies found traces of microplastics in salt products sold in those countries, but we haven’t known how much.”

The new study, she says, “shows us that microplastics are ubiquitous. It’s not a matter of if you are buying sea salt in England, you are safe.”

The new study estimates that the average adult consumes approximately 2,000 microplastics per year through salt. What that means remains a mystery.

A separate study by the University of York in Britain that sought to assess the risks of microplastics to the environment, published Wednesday, concluded not enough is known to determine if microplastics cause harm.

The review of 320 existing studies found “major knowledge gaps” in scientific understanding of the impact of microplastics. The studies examined different types of microplastics, including microbeads, fragments, and fibers, leading to a “mismatch” of data that makes comparisons akin to comparing “apples to pears,” Alistair Boxall, a University of York geography professor and co-author of the study, said in a statement.

“Based on our analysis, there is currently limited evidence to suggest microplastics are causing significant adverse impacts,” he said. “There is an urgent need for better quality and more holistic monitoring studies alongside more environmentally realistic effects studies on the particle sizes and material types that are actually in the environment.”

That new study, funded by the Personal Care Products Council, an industry trade group, was published in the journal Environmental Toxicology and Chemistry.

Boxall added that the focus on microplastics may divert attention from worse environmental (and more easily identifiable) pollution problems, such as small particles released from car tires.

National Geographic is committed to reducing plastics pollution. Learn more about our non-profit activities at natgeo.org/plastics. This story is part of Planet or Plastic?—our multiyear effort to raise awareness about the global plastic waste crisis. Learn what you can do to reduce your own single-use plastics, and take your pledge.

We are hearing more and more about the wonders of aquaculture and how it will be the centerpiece of our solution to the problem of feeding an over-populated planet (estimated to be 9.7 billion by 2050). This article gives us a sobering look into the benefits as well as the dangers it holds. A successful […]

Read the following article and be amazed at the intelligence demonstrated by humpback whales off of Baranof Island in Southeast Alaska recently.

With more than 90% of the world’s sunflower starfish gone, it is urgent to do something. Click on the link below to see what is being explored to save the sunflower starfish. Scientists believe “hope is not lost.” https://www.hakaimagazine.com/videos-visuals/sunflower-sea-stars-now-critically-endangered/?omhide=true&utm_source=Hakai+Magazine+Weekly&utm_campaign=a5a8764fd2-EMAIL_CAMPAIGN_2017_09_06_COPY_02&utm_medium=email&utm_term=0_0fc1967411-a5a8764fd2-121639553

Urchins and Kelp: The need to balance

Throughout the Pacific we are seeing an alarming reduction in the number of kelp forests. The sea star wasting that has been decimating the sea star populations along the US and Canadian West Coast, and the absence of sea otters along much of this same region, has left sea urchins without their main predators and […]

The Problem is Us

Click on the video below to hear a deeply challenging assessment of the causes of global warming and environmental destruction. It’s sobering. At the same time it is hopeful, because we CAN DO something about it! We just need to have the will and the wisdom.

CLICK ON THE LINK BELOW to learn how oyster restoration is being done to rebuild ocean habitat.